A Brisbane mum has revealed how cybercriminals stole $24,000 from her loyal followers after hacking into her social media accounts.

In February, her Instagram account was targeted by cybercriminals who stole thousands from her loyal followers using a fake bitcoin scheme.

In just seven days the fraudsters swindled a dozen Aussie mums out of $24,000, as Ms Van Dijk desperately tried to regain control of her account. 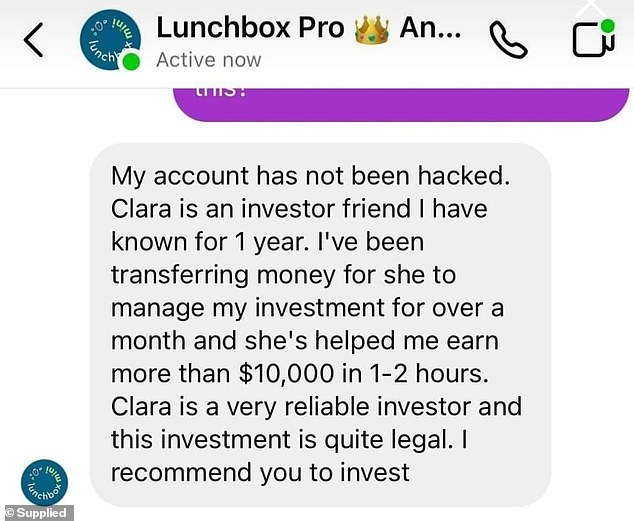 Scammers told Ms Van Dijk’s followers they could make $7,000 in just two hours if they invested $1,000 (pictured, a message sent from the scammers to a victim)

She explained the hackers had posed as members of the Meta group who own Instagram and Facebook, and sent her an email notifying her that one of her Instagram posts had been flagged for copyright issues.

The email said she had 24 to 48 hours to click the button to ‘dispute’ the claims before her account would be deactivated or deleted forever.

Within two minutes of clicking the button the Brisbane mum received an email notifying her that her Instagram password and email had been changed.

‘It was a long seven days for me,’ Ms Van Dijk told Daily Mail Australia.

‘I knew every single day…

Security services warn ‘skimming’ scam is targeting online shoppers in the run up to...

Woman sees all the red flags after scammer lies about sending her R19 500...